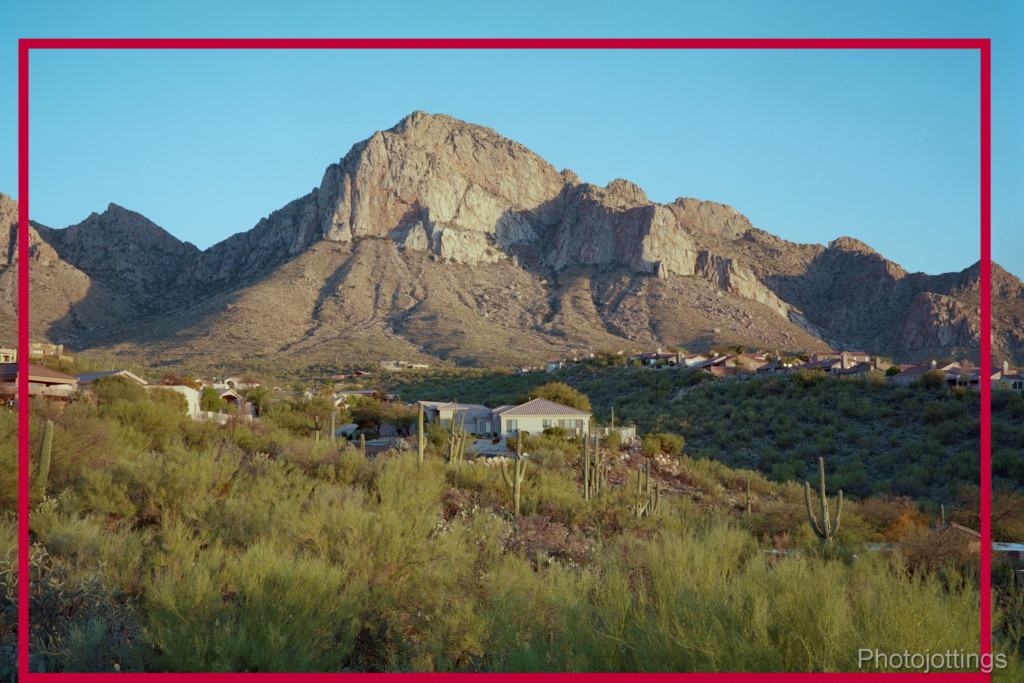 I’ve been playing with my new Kodak Medalist II the last couple of months, and suddenly realized I have a direct comparison image from the Kodak and Fuji GW690III taken during my mountain scene test shots.  I still haven’t had the chance to do a proper test sequence with the Kodak, but I will once I get a few spare minutes, and of course take some other sample shots too.

Fun fact; the Kodak Medalist 100mm lens is so sharp, you have to be very careful about focusing, you can’t just crank it out to infinity at long distances like you do with other cameras, like the Fuji GW690III.  Crazy, but I screwed up most of the Kodak mountain test shots because I focused on the ridgeline behind the houses in the center, instead of the center house, oh well, $20 in film and processing down the drain.

This isn’t an exact comparison as the Kodak has a 100mm lens, and the Fuji 90mm, so the Kodak covers less area, giving it an advantage.  However,  I used Porta 160 for the Kodak Medalist, and Kodak Ektar 100 for the Fuji.  Ektar is slightly smoother and a bit sharper than Portra 160, so that may reduce the Medalist’s advantage.  The images were taken a few days apart, but at the same time of day.

In a nut-shell, and off the cuff since I only have one picture each for comparing: The early 1940s Kodak Medalist lens is really impressive; it has less color fringing than the late 1970s Fuji lens design, and is slightly sharper along the sides at F/22.

Inside the red border in the top image represents approximately where the Kodak 100mm lens coverage is as compared to the 90mm Fuji lens. 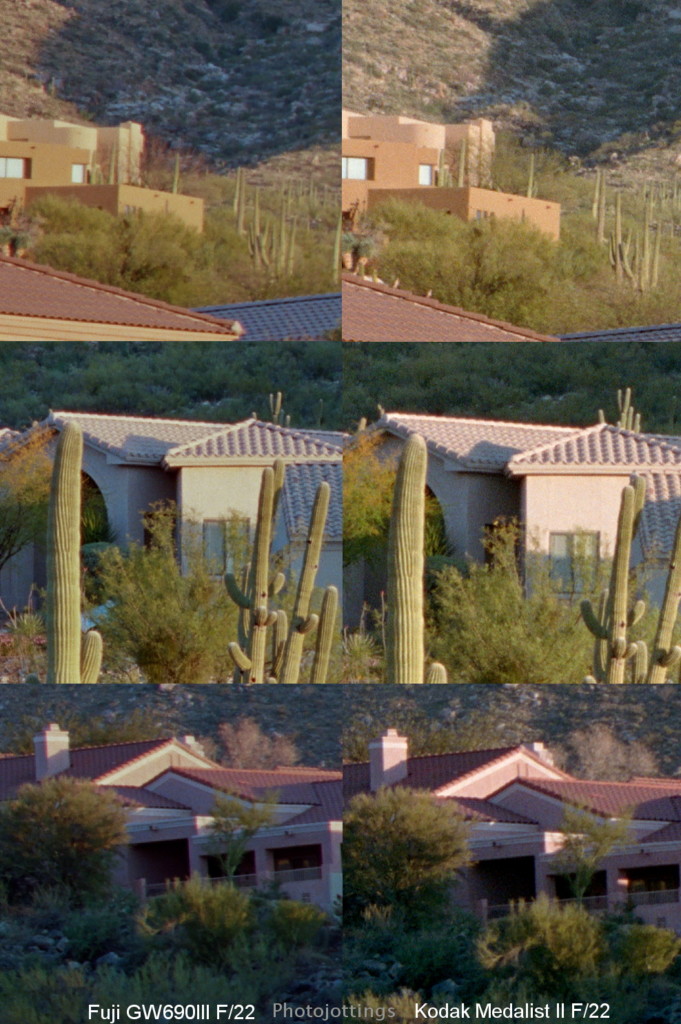 Comps from the extreme left side, (top row), center, (middle row), and extreme right side, (bottom row).  Fuji on the left, Kodak on the right.

Here are the full size images. 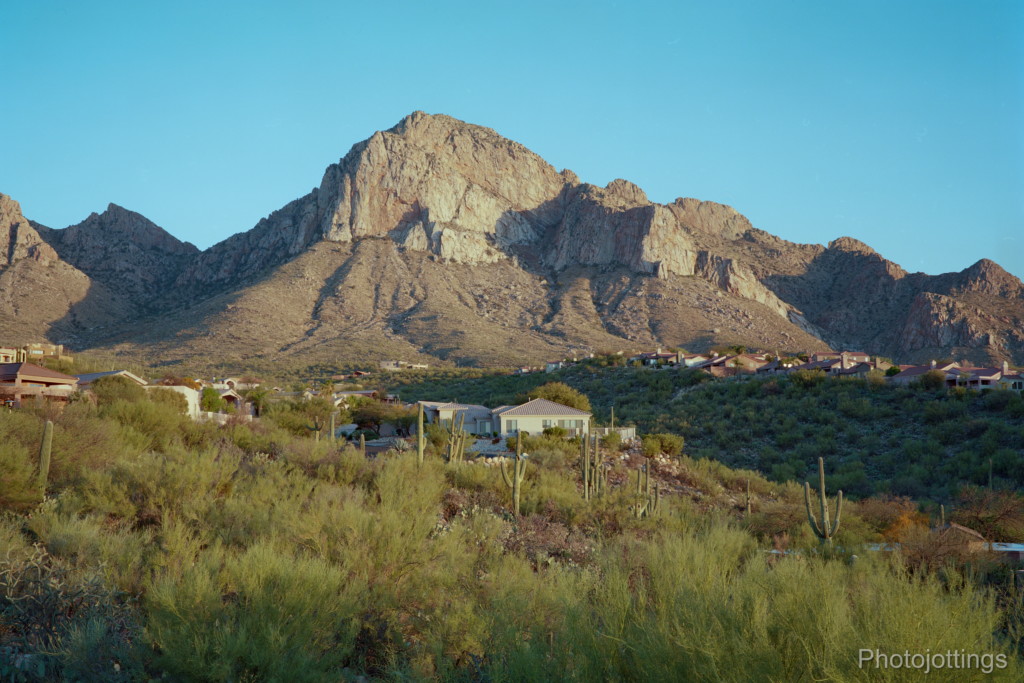 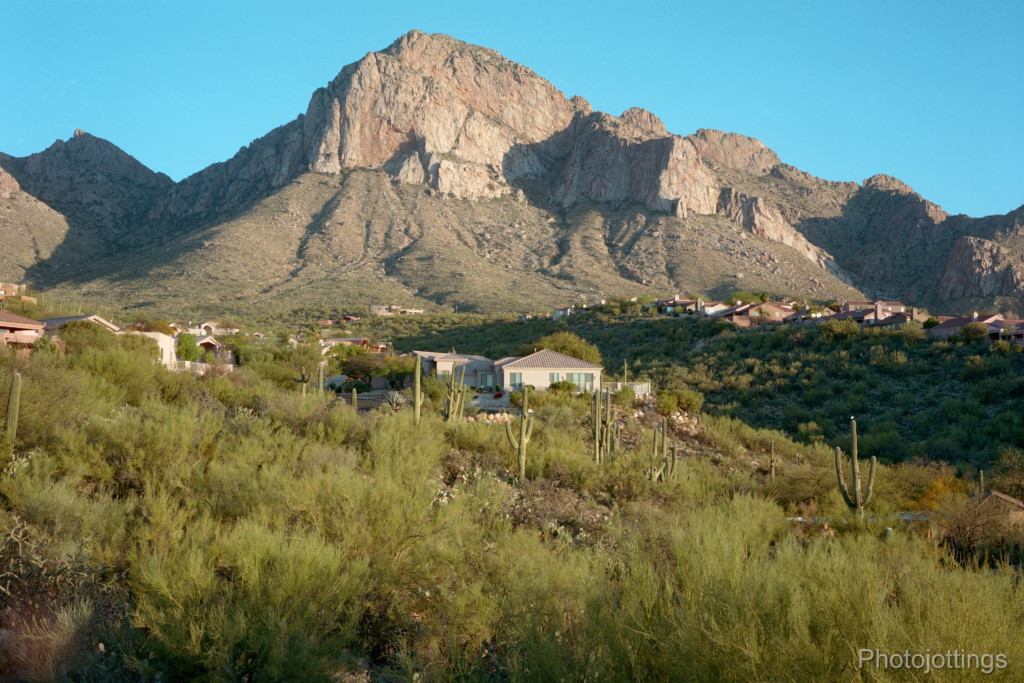 That’s it for this quick comp of  two images.