Sony introduces a new flash geared towards big flash users.  It’s called the HVL-58AM, and it pivots, swings and tilts providing what Sony calls the “quick shift bounce system.”  It claims a maximum guide number of 58 at 105mm at ISO 100, but this is using a non-conventional rating. I’m no flash expert, but I don’t think it will come anywhere close to that number in real life.  They’re also claiming you can assign power ratios for up to three groups (flash units) at the camera without setting each individual unit (or flash), with full use of modeling flash on each unit according to the values set.  I don’t think this is going to be possible using rebadged Minoltas as wireless units.  Maybe the HVL-42AM is compatible, though I’m not sure.  Also of note; they’re going with a 16mm diffuser instead of a 17mm, so I presume we’ll be seeing a new super-wide angle (zoom)? soon. MSRP, $500 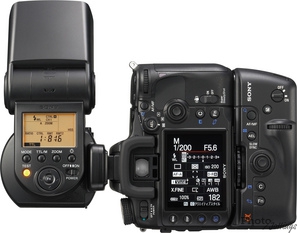