Check out the survey results below.  The percentages for each lens at first glance appear too high, but includes the three lens choices that were possible for each person taking the survey.  Clearly the Tamron 70-200mm F/2.8 is the most popular lens in the survey, and will get a concise review, along with the Sigma equivalent (and the teleconverters) for the lenses.  I’m also going to do a Sigma 24-70mm HSM review based on the interest here. I’m surprised more people weren’t interested in the fisheye lenses, especially for the APS-C cameras.  I thought about reviewing one of those, but it looks like it might be in vain, so the heck with it.  The Tokina 11-16mm F/2.8 was high on the list, so that will probably get a review too.  There doesn’t seem to be much excitement in the Sigma 300mm and 100-300mm lenses, so those will go on the back-burner indefinitely.  Weird, but the Tamron 60mm F/2 macro got a lot of hits, so that will certainly be considered in the future.

I’ll probably end up reviewing everything from the Bowers/Vivitar 85mm lenses on up to the top. Funny, but there were several people that wrote in they wanted the Minolta AF 28-85mm F/3.5-4.5 lens reviewed.  I did that one, it’s listed on the lens review page.  It’s also the one I smashed to pieces
for the dirty lens article.  Maybe they meant the 24-85mm lens?  A couple of people wrote that one in too.  The Sigma wide angle F/1.8 lenses might get a review also, but not right away. Most written comments were for the Minolta prime telephoto lenses, like the 200mm F/2.8 and 400mm F/4.5, but also included a number of requests for accessories reviews like flashes, filters tripods and bags etc.  The Sigma 50mm HSM and 85mm F/1.4 got a few votes too.  I’d like to do a review of the Sigma and Minolta primes, but I’m not sure about reviewing the accessories, well maybe some stuff
when I have time. There were many positive comments and good ideas posted.  Again, thanks
to everyone that took the survey, and to all the visitors in general.  If you would like to help support the site, go here for ideas! There were 426 total responses, with about a third of the responders using the comment box. 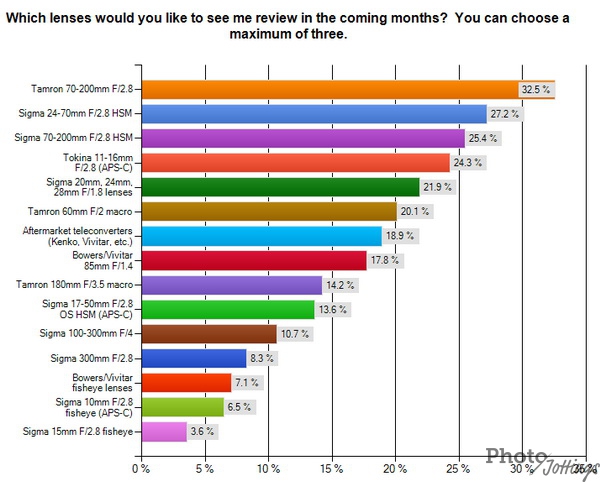