Question 1.  How can I tell if I’ll be able to use a Tele-converter on my Sony lens?

Sony only makes a few lenses that work with Sony tele-converters, and you can tell instantly if they’ll fit by looking at the rear of the lens.

The left shot shows the Sony 70-200mm F/2.8 G lens, which is one of the compatible tele-converter (TC) lenses.  See how big the opening is, and how there are no obstructions inward of the brass contacts?  Now look at the right shot of a non compatible lens, see the obvious difference, and obstructions past the contacts?  Also, if the retail price of the Sony lens is less than US $1398, it will not accept a Sony Tele-converter (as of 7/12).
There are plenty of after-market tele-converters available that will mount on any Sony or Minolta lens, unfortunately, based on my limited field use, I’d steer clear of these due to lack of sharpness and focusing problems.
Question 2.  Are polarizing filters still useful? I can make the sky a deeper blue in Photoshop.
Polarizing filters have more uses than just enhancing a blue sky.  I most often use one for mitigating reflections from rocks, glass surfaces, water, or tree leaves.  Check out the boring samples below.

In the top row, the picture glass is reflecting outside light from the door to the left.  By turning the polarizer, you nearly eliminate those reflections.  In the second row, the sidewalk is washed out from the early afternoon sun.  In the third row, the sky is darker with the polarizer, so the palm fronds show their wispy ends, which are lost against the bright sky without the polarizer.  The next row is a general shot taken in bad, late morning light, and shows what beginners use the polarizer for.  I’d rather wait for good light, then I don’t have to worry about getting a nice, blue sky.  The second to last row shows how the harsh reflections are removed from the leaves.  The last row shows what happens when you take wide angle pictures with a polarizer, say 28mm and wider.  Only part of the sky responds to polarization, and produces a “band” effect, especially noticeable on super wide angle lenses.  I don’t like the look of polarizers in wide angle pictures.  All images are crops, except rows four and six.

The best way to learn how to use a polarizing filter is to hold it up to your eye and observe what’s happening as you rotate the filter under different lighting situations.  Experiment outside and inside.  Make sure you look through the filter as you would mount it on the lens, (or filter threads towards your eye) otherwise, it doesn’t work.

If you have a fixed lens camera with no way to attach a filter, you can still use a polarizer, simply look through the filter as you turn it to get the best effect, then hold it against the camera lens.  Or, just hold it up to the camera lens and turn it as you look at the LCD screen for changes.  Use whichever method works best for you.

Some people think they can replicate the function of a polarizing filter in Photoshop.  For the most part, this is hogwash.  You can “jack” the color of the sky in Photoshop, but you can’t replace lost information due to blown-out reflections.

For modern cameras, get a circular polarizing filter.  I’d also get a large size, say a 77mm, and buy step up rings to fit all your lenses, so you don’t have to buy a separate filter for each lens.  Make sure you don’t buy a linear polarizer, which is meant for older, manual focus and metered cameras.

Question 3.  How do I check to see if my lens has a circular aperture?  When I look in the front of the lens, I see curved blades, but your specs sheet says it has straight blades.  Are you mistaken, or just dumb?

I might be dumb, but probably not mistaken.  When you look through the front of any (Sony/Minolta) un-mounted lens with the rear cap off, the aperture blades appear curved, but they may not form a circular aperture, you’ll need to check a couple of things to be able to determine this.  When you install the rear cap, the aperture will open by design, the tighter you turn the cap, the wider the aperture will open.  If the shape resembles a nice round circle when the aperture is not quite fully open, most likely you have a circular aperture.  If there’re distinct straight sides at near, or full aperture, and (for Sony) resemble the shape of a heptagon (7 sided figure), most likely you have straight blades.  You can also move the aperture lever, shown below, to open up the aperture to full, or near full, and see what shape the opening resembles. 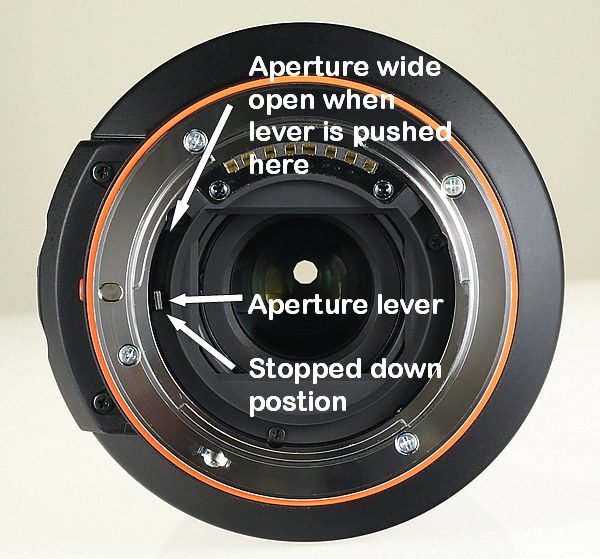 The lever is recessed in the mount, and is usually not accessible with a finger.  A toothpick makes a convenient tool, and is soft, so you won’t scratch anything.

If you’re still not sure about the shape of the opening, here’s one more way to check.  Mount the lens on the camera, turn it on, and look through the front of the lens as you stop down.  Make sure you have sufficient light to see inside, and maybe a magnifying glass to make things a little easier to see.  On zoom lenses, use the longest zoom setting, which makes seeing the aperture easier.  Also, you’ll need a depth of field preview button, not available on all cameras.  Simply stop down one stop, and push the DOF button and look at the shape of the aperture.  Try it again at two stops down, and see what the shape is.  If you have an F/2.8 lens, stop down to F/4 and F/5.6, etc.  Most circular apertures will remain nearly a circle at two stops down.  Straight blades will show up at one stop down.  When the aperture is all the way open, you really can’t tell what you have, that’s why it’s important to close the aperture slightly.  If you’re really coordinated, you can hold the DOF button in, while you move the aperture control dial, and see what happens in 1/3, or 1/2 stop increments.