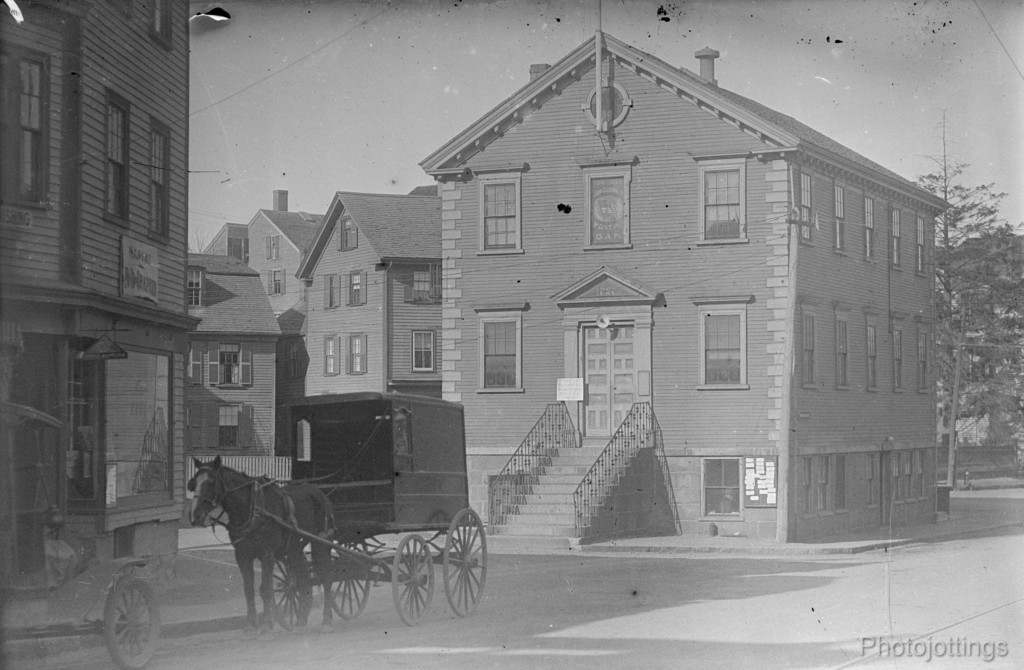 Greetings from the corner of Mugford and Washington st!  I thought I’d display another sample from my glass plate negative collection, (this one is tiny for back in the day, but considered large by today’s standards), it measures exactly 2¼ x 3¼” (6×9).  Our Georgian style Isaac Mansfield designed subject is The Old Town house in Marblehead Massachusetts, built in 1727, more info here.  I’m guessing the image was probably taken in the teens to early 1920s as the car on the left suggests; looks like a Ford ‘T’ but I’m not sure.

Just for fun, let’s take a guess at the equipment used, and the camera settings shall we?  The photograph was probably taken by an excited hobbyist that just bought, or received a combination back for their Kodak No. 1 folding camera, which was very popular back then, and used this size film; either plates, sheets or 120 roll film.  Almost certainly the camera was on a tripod, and stopped down to about F/22.  How can I know that? Because I have several of these cameras in my collection and have used them; also, the three element and even Tessar type four element designs of the time required the aperture to be stopped down quite a bit before the sides would look sharp as you see in the image above.  Even though this glass plate seems to have faded significantly over the last century, the level of detail is quite good, I can just barely make out some letters on the sign by the front door; I think it says something about a consignment sale. Also, is that a man wearing a hat in the basement window to the right of the stairs?

The film speed back then was probably equivalent to around today’s ISO 10-20 based on exposure recommendations in owners manuals, so at F/22 in bright light the shutter speed was approximately 1/4 second for a proper exposure.

The detail in the small negative is quite surprising for so long ago.  In my opinion, the photographer did everything right to get the best quality from what was then considered an amateur camera and format. One might argue about the framing; it seems to be a simple snapshot rather than a careful composition; (excited hobbyist testing new equipment?), however, a century later I can appreciate the horse and delivery wagon, and of course the old car.

An excerpt from this page reads in part; John Goodwin built this place in 1727, and it still stands at the junction of Washington and Mugford streets. It has been designated for the National Registry of Historic Landmarks. “Within its walls nearly every question of importance to the town, the state or the nation was discussed by local orators for more than a century,” Samuel Roads Jr. wrote about the yellow-clapboarded structure in his history and traditions in Marblehead.

Check out the gallery photos below. The first image is the glass plate, the next two are from a google street view, the last picture is the approximate photographers position.