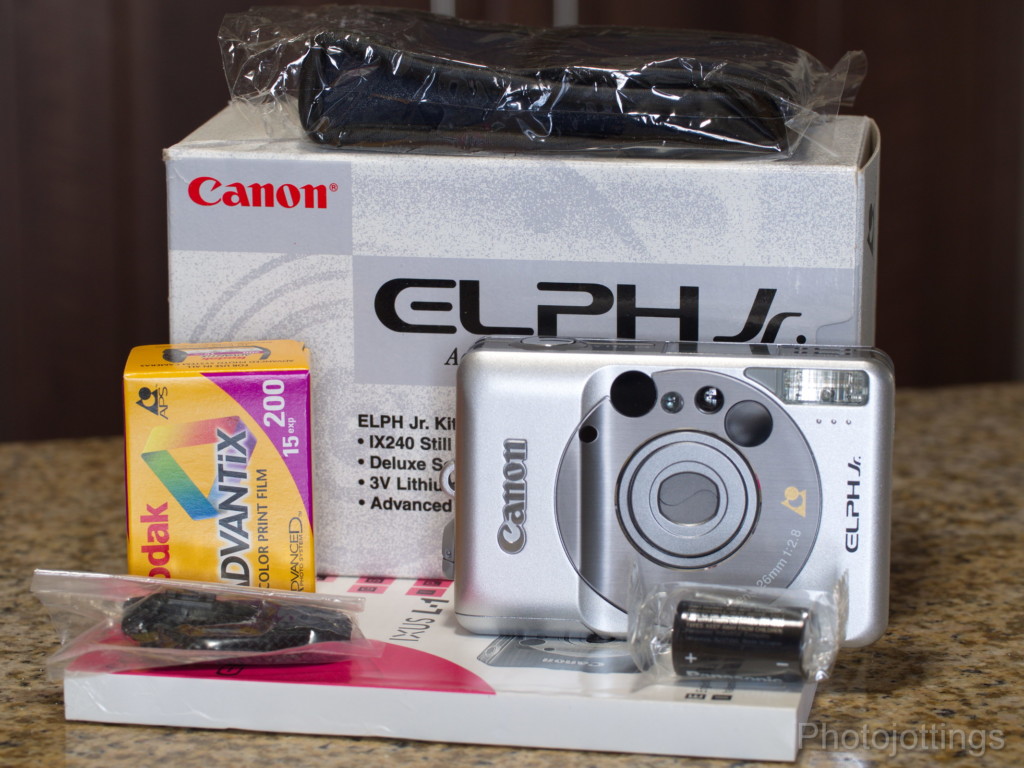 The Canon ELPH Jr IX240 is the most convenient pocket camera I’ve ever used, film or digital.  Size wise, it’s similar to a pack of cigarettes, and fits in your shirt pocket just fine, see picture below. The ELPH Jr is a film camera, and uses APS film which has not been manufactured since around 2010-11.  However, there is a bright spot for those that want to experiment with this state of the art film system.  Currently, Amazon and eBay have some ‘cold stored’ film available here Amazon, eBay, and that’s mostly what I’ve used for this review.  Note: do not buy film with an expiration date, it probably won’t turn out.  Be sure you buy film that says something similar to ‘cold stored’ or ‘bulk rolled from refrigerated stock’ and guaranteed etc.  I’ve had good luck lately from a dealer called 21supply using Fuji Nexia A200 15 exposure rolls.  Currently available Kodak film turns out too red.

With the introduction out of the way, let’s check out the Canon ELPH Jr specs.

Price; originally around $99-$129 new.  Current eBay prices range anywhere from $10 to $25 for the kit above depending on condition.

Build material; appears to be a mix of plastic and metal.

Prints; you could set the camera to any crop mode at any time. So whatever setting  you chose, like ‘C’ or ‘H’ for instance; the shop would print your photos in that aspect ratio, even though the whole image, (‘H’) was on the negative.

Approximate resolution; good film will make very sharp 4×6″ prints in ‘C’ mode; extreme sides may be soft in ‘H’ and ‘P’ modes when printed in those formats.  See sample images farther down the page.

Shutter and speed; combination aperture and program electomagnetic drive shutter, between 2 seconds and 1/800 sec, automatically set.  Manual claims the camera will apply +1.5 exposure compensation automatically in back lit situations. I did not notice it in real life.

Features; Fill flash, Red eye reduction, slow sync, auto, and flash off options.  Mid roll rewind only, there is no mid roll change option.  Ten second self timer. Date imprinting to year 2029, goofy title selections like happy birthday, I love you and all that. No magnetically stored-on-film camera settings option on this model, such as aperture, shutter speed etc.

Crippling features and omissions; there is no way to adjust exposure, witch will be needed for proper exposures using outdated film, but was not needed back when they were still making fresh film.  Also, when pressing the shutter button all the way to take a picture, the camera locks focus after moving the lens back and forth, and then takes the picture, so about 2 seconds to do that which isn’t very speedy.

Good features; a lack of user options makes it a quick and no fuss camera, which is good, right?

When pressing the power button the lens takes 1 second to extend and is ready to shoot.

There is no film leader, just insert the film into the camera and close the lid.

Small optical viewfinder window, with green (top) ready indicator, and below an orange slow shutter or flash charge warning. Inside is a small rectangle showing the auto focusing area and parallax frame lines.  The ‘P’ ‘H’ and ‘C’ selector is used to crop the viewfinder, but does not actually crop the negative.

On top we have a small LCD showing frame number, battery indicator, date, cartridge loaded, flash setting, self timer and remote control. The big round button is for the shutter, and on the left is the title/date select and set feature. Frame numbers go up as you shoot, showing how many shots you’ve taken, not how many shots you have left.

The side has the flash setting button, mid roll rewind, and 10 second self timer. 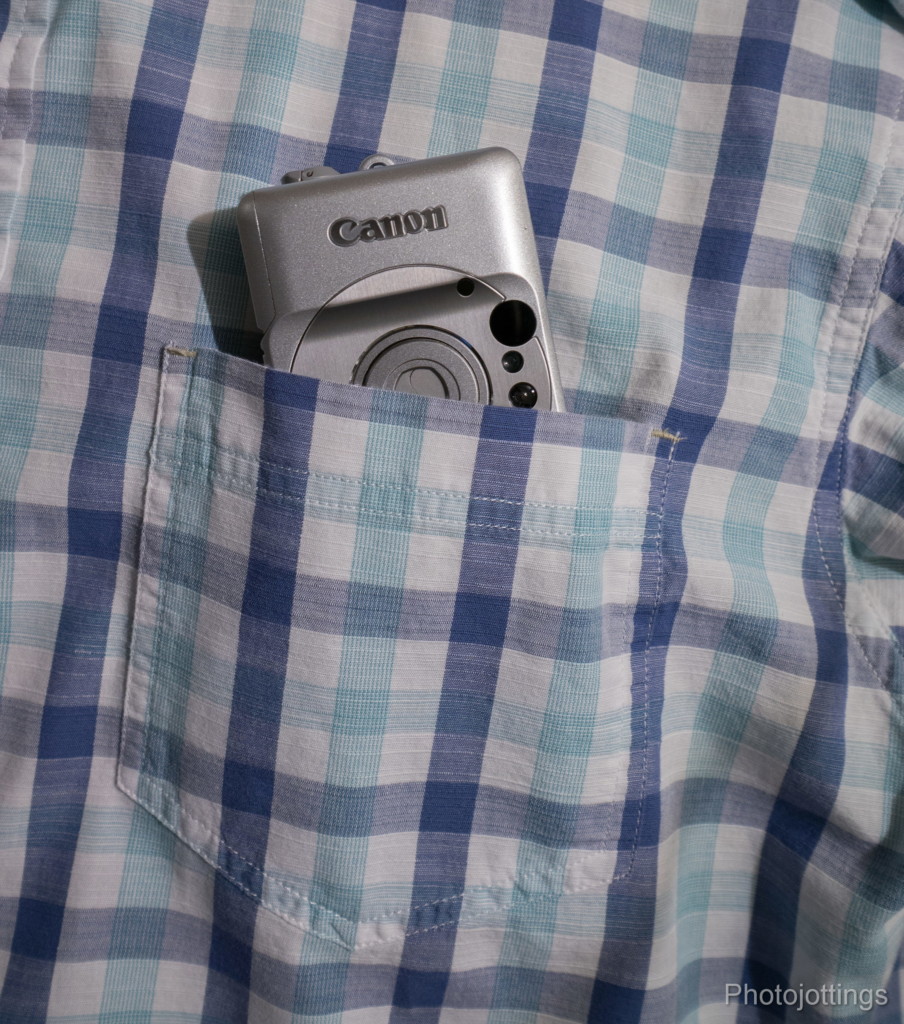 The camera is about the same size and weight as a pack of smokes, and fits in your shirt pocket.

1. full circle: unexposed  2. half circle: partly exposed  3. cross sign: fully exposed but not processed  4. rectangle: processed.  Round hole to right is the film door opener to retrieve the film.

This is a full image from the negative, and what the ‘native’ size or aspect ratio is on every shot.

Cropped to the ‘C’ mode, the same aspect ration of 35mm film.  The sides from the ‘H’ mode are cropped off for printing.

Here is a ‘P’ mode crop, or panoramic image.  In this mode, the top and bottom are cropped off for printing 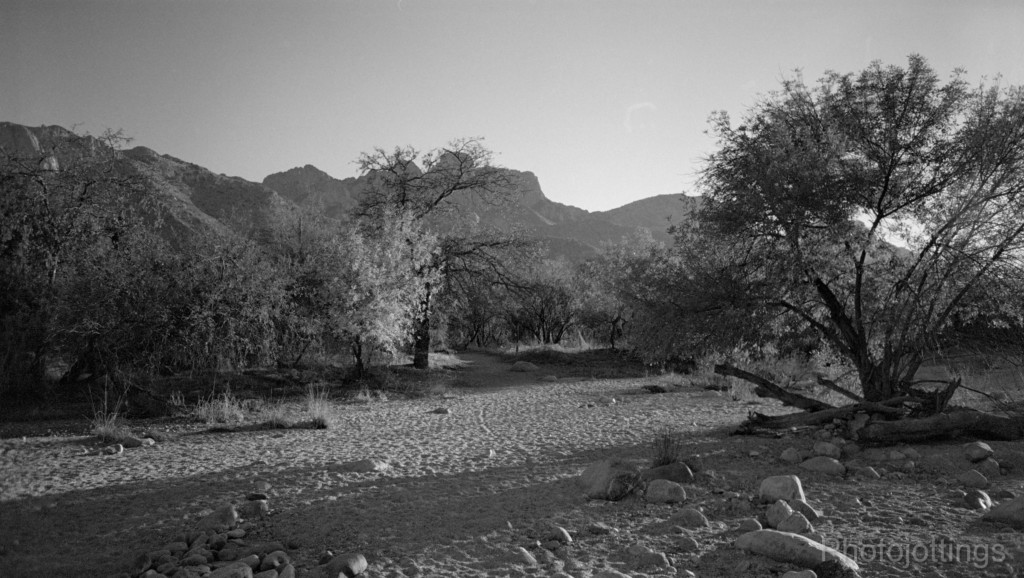 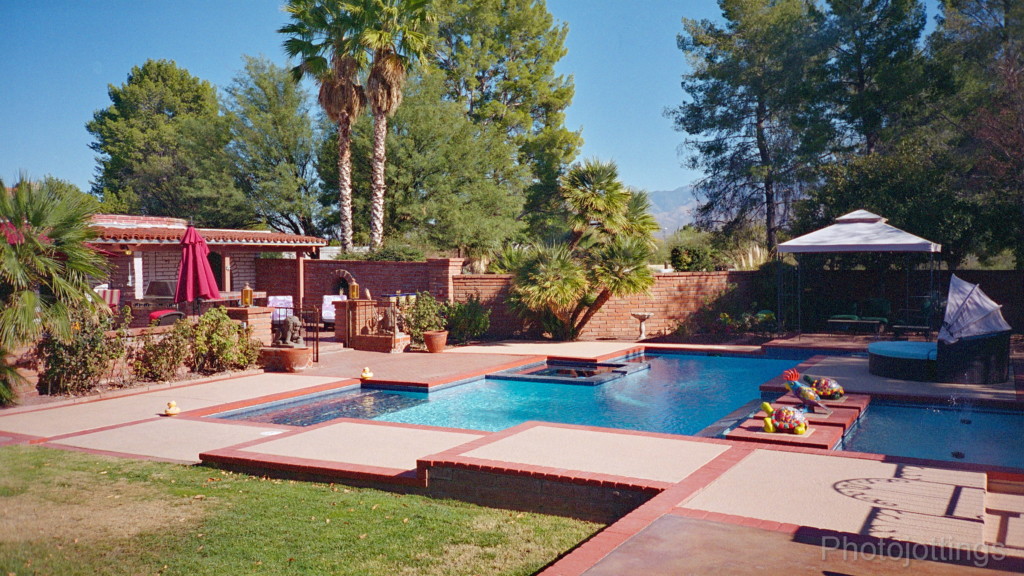 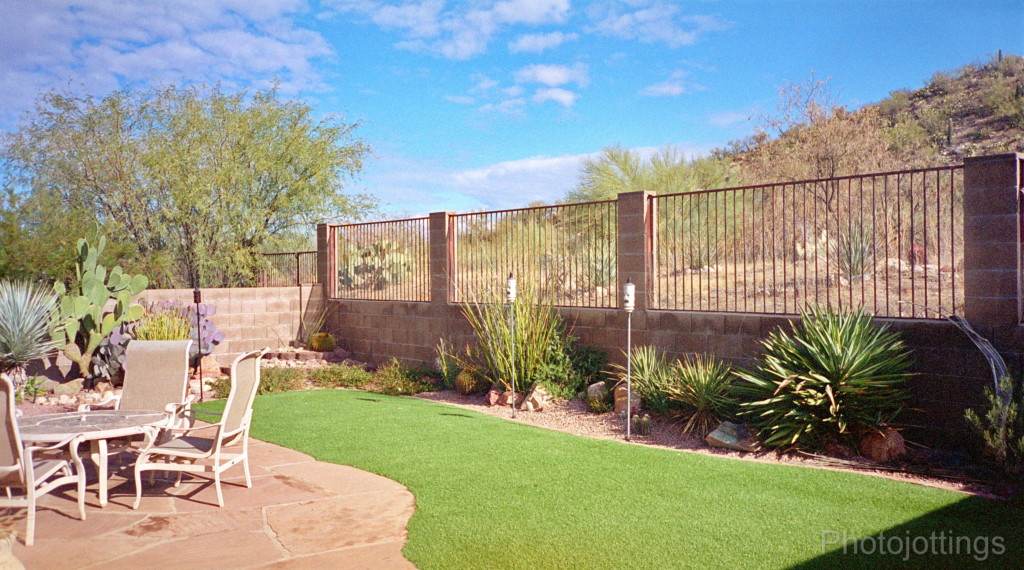 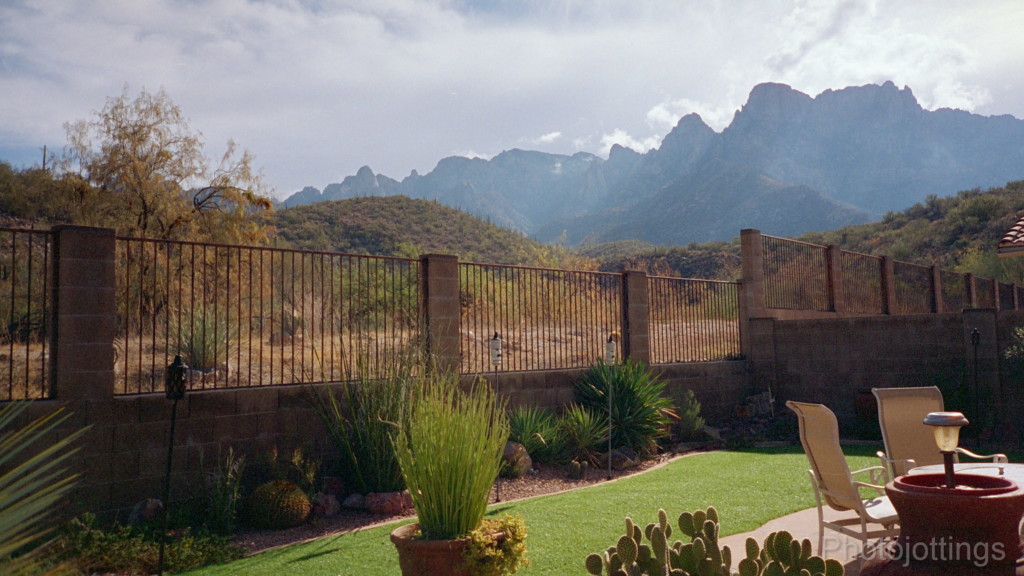 This scene could’ve used about  +2 stops of exposure compensation. 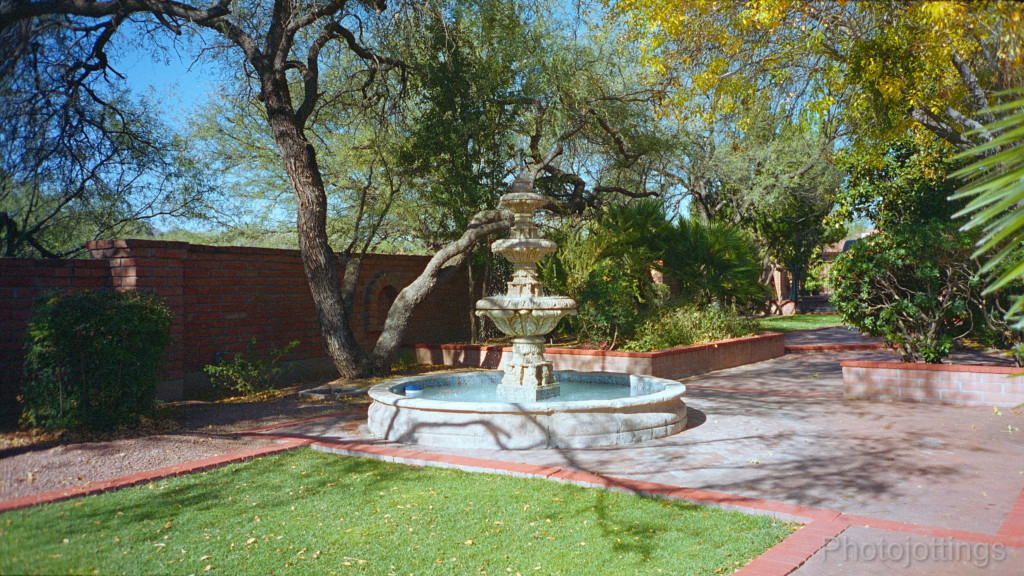 I found and photographed the fountain of youth. 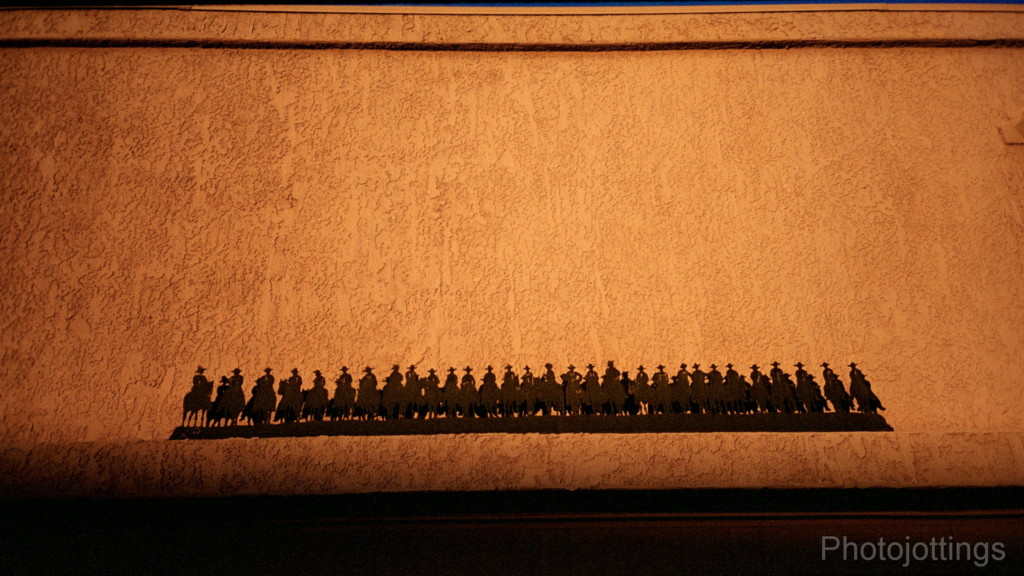 Wavy distortion is visible along the top, the lines should be straight.

This tiny, but innovative Canon ELPH Jr won’t replace your 35mm camera, or good cell phone for that matter, but it is fun to use, and works well with cold stored film available here, Amazon, eBay.  I’ve used Fuji Nexia 200 for the color pics here, but have also successfully used Kodak Advantix 200, but not lately.  Note: do not buy film with an expiration date, it probably won’t turn out.  Be sure you buy film that says something similar to ‘cold stored’ or ‘bulk rolled from refrigerated stock’ and guaranteed etc.  I’ve had good luck lately from a dealer called 21supply using Fuji Nexia A200 15 exposure rolls.  Currently available Kodak film turns out too red.

Developing; your local photo developer may not want to process your APS film because they don’t have the proper scanning masks or holders, and can’t print properly from the film data.  Fortunately, you can tell them to just develop and sleeve the film, the same as they would do with 35mm film, and then use your flatbed scanner to do it yourself.  I use an Epson V700/V750/V800/V850 scanner (B&H, Amazon, eBay) with this holder.

A little info on the APS film format.

The Advanced photo system was a completely new type of film format that came out in 1996; it was smaller than 135 type, (typically called ’35mm’), and larger than 110 film, which was popular in the 1980s.

The film was stored in a cartridge, and had no leader, so there was no threading or laying the film across the sprockets in hopes of it catching and moving forward as you did with 135 film type. You just inserted the cartridge, closed the door, and the camera would advance the film as you took pictures, and rewind it when the last picture was taken.  All APS cameras had automatic film winding and ISO settings.

Neat features include visual exposure indicators on the top of the cartridge; see the picture above: an optical strip, (cheap models), or magnetic IX strip (better models), along the film bottom would include certain settings like print type, C, H or P for example, and maybe camera settings on more advanced models.  When you were done shooting, the film was automatically wound back inside the cartridge, and you took it to the shop for development and prints. The APS film format also incorporated  a protective feature that stored the negatives inside the original cartridge. So when you got your negatives back, they were inside the cartridge; if you wanted to know what pictures were inside, you looked at the index print provided by the developer, which included a number that matched the cartridge to the index print.

The Advanced Photo System was very innovative, and actually pretty cool; it was a nice try; however, it was also too little, too late as they say.  By the late 1990s, digital was starting to become affordable, and quality was quickly improving each year.  By the mid 2000s, the APS format had one foot in the grave.