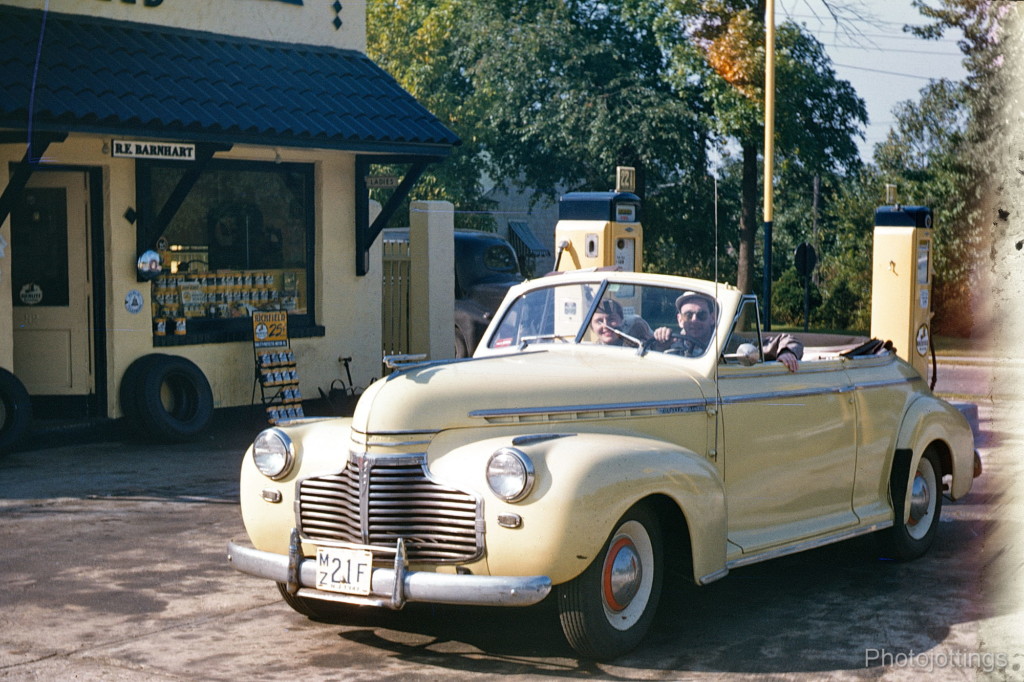 Ding ding, hey pal, fill ‘er up, but before you do, take a picture of me and my gal!  I was photographing a home a few years ago, and noticed a large tray of slides on a table in the hobby room.  I asked the homeowner if she took them, and she didn’t really say, but offered them to me because she was downsizing, and the slides were otherwise headed for the trashcan. I told her I’d scan them and send the copies to her as a thank you; unfortunately, I didn’t get around to scanning them until quite a few years later, and now I think too much time has passed if you know what I mean.

The scene is a 1941 Chevy convertible at an R.F. Barnhart Richfield gas station, possibly in New Jersey. Both the building and car are wearing the same color, in the case of the car I think it’s paint code 298; cameo cream.  The license plate indicates Monmouth county NJ, 1947.  Neat items of interest include; quart of oil, 25¢; gas is 22½ per gallon, and I see a ‘ladies’ sign on the end of the station; hope it’s clean. Notice the little spaniel, (Cavalier King Charles maybe) between the two. I think the lady in the car is the one who gave me the slides. Prices converted to 2017; quart of oil; $2.69; gasoline real value; $2.42; so today’s gas and oil are a little cheaper; at least as I write this post!

I’m guessing the travelers were thinking how cool it was that the gas station was the same color as the car, that’s why they had someone snap the picture.

There were over a hundred slides in the tray, and most of them were blurred due to movement, which may be understandable as the film sensitivity for Kodachrome back then was about ASA 10; although having most of them blurred is an indication that someone was a bit shakey by nature; and should have used a tripod.  Apparently the lady wasn’t too thrilled about the quality of the pictures either, that’s why she gave them away.  Also, none of the slides are very sharp, even by the standards of the day, so I’m guessing the camera was inexpensive.

A few slides show a brick home at 960 E Broadway, Woodmere, NJ, so one of them might have grown up there.