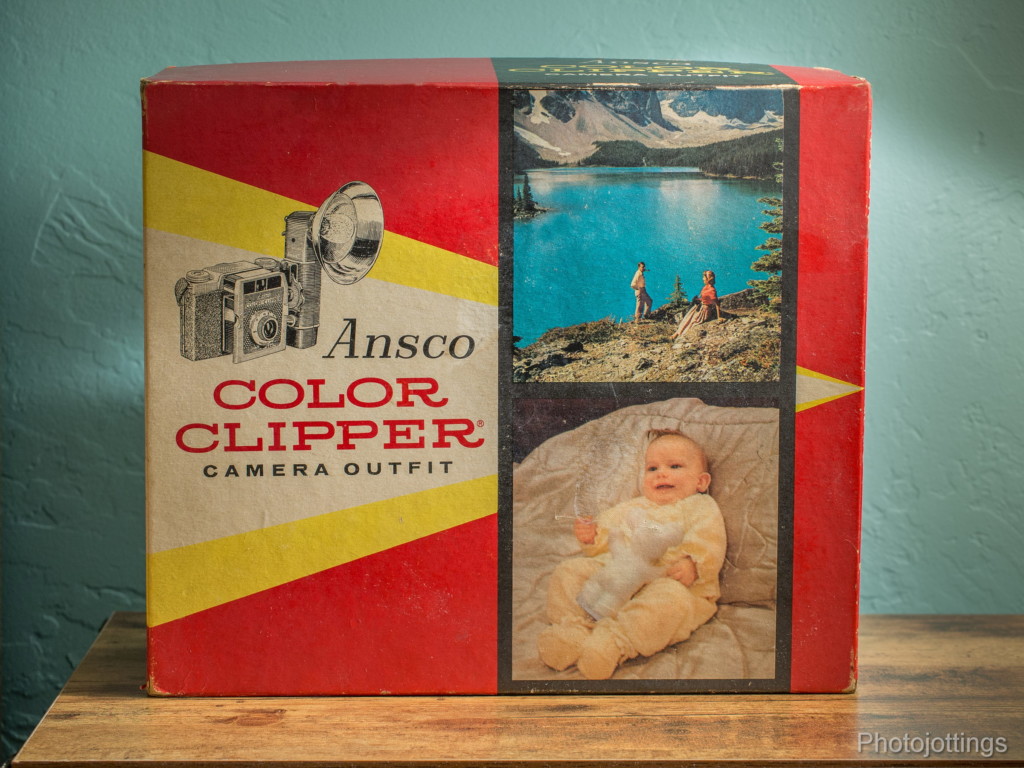 Our next camera up for review is the Ansco Color Clipper; complete with flash unit!  This was an eBay impulse buy, and I think it was about $50. I’m a sucker for weird cameras, especially when they’re in good usable condition as this one is.

In the early 1950s when the camera was made, the “Color Clipper’ name was probably chosen to try and fool people into thinking it was made specifically for color film; which was pretty new and cool back then; however, any camera will produce nice looking color pictures, even century old folders.

The Ansco Color Clipper is well build, uses readily available 120 film, and has zone focusing and double exposure prevention, not bad for an inexpensive ‘outfit’ back in the day.

Some of these old cameras are capable of producing pretty good prints using cheap meniscus type lenses, and my hope was that this one would be good enough for medium sized prints.  To find out if it met my expectations, go to the bottom of the review; but first off, let’s take a look at the camera specs.

Manufactured by; Ansco, in Binghampton NY.

Date of manufacture; not sure, but most likely in the early 1950s.

Price; originally around $22 for the outfit.  Current eBay prices range anywhere from $10 to $60 for the outfit depending on condition.

Aperture; approximately F/16 for the ‘color’ setting, and F/22 for B&W. Those numbers are based on measuring the physical aperture hole on both this camera and an Agfa Isolette with 75mm lens at those stated apertures.

Original print size; standard oversize prints 3½” x 3½,” at this size most shots look good.  Today you’ll most likely get 4″ x 4″ and they look good too.

Approximate resolution; center area will make good 5×7″ prints, but the sides will be noticeably soft when printing the whole image to 8×10.  See Sample images at bottom of page.

Features; two apertures to choose from, listed as ‘color’ (F/16) and ‘b&W’ (F/22).  Flash attaches to side of camera via thumb wheel. Syncs with the shutter, and has battery check test bulb opposite the flash bulb.

Double exposure prevention; yes, but you can take double exposures by simply lifting up the red shutter lever to cock it using your finger.

Crippling features and omissions; the shutter speed is very slow, so blurry shots may be a problem for jittery folks, however, I shot a whole roll and had one blurry shot, and I consider myself jittery, so maybe it’s not really a problem.  The ‘color’ aperture is too wide for the low quality lens, and the pictures are quite ‘soft’ looking, this is partly due to the curved film gate that has no pressure plate.  The tunnel-like viewfinder is small, but is reasonable bright if it’s clean. No ‘bulb’ or ‘time’ mode, so no low light pictures.

Good features; it takes widely available 120 film.  It’s reasonably well made with a simple build design, so it should work properly after all the years with zero maintenance or fuss. 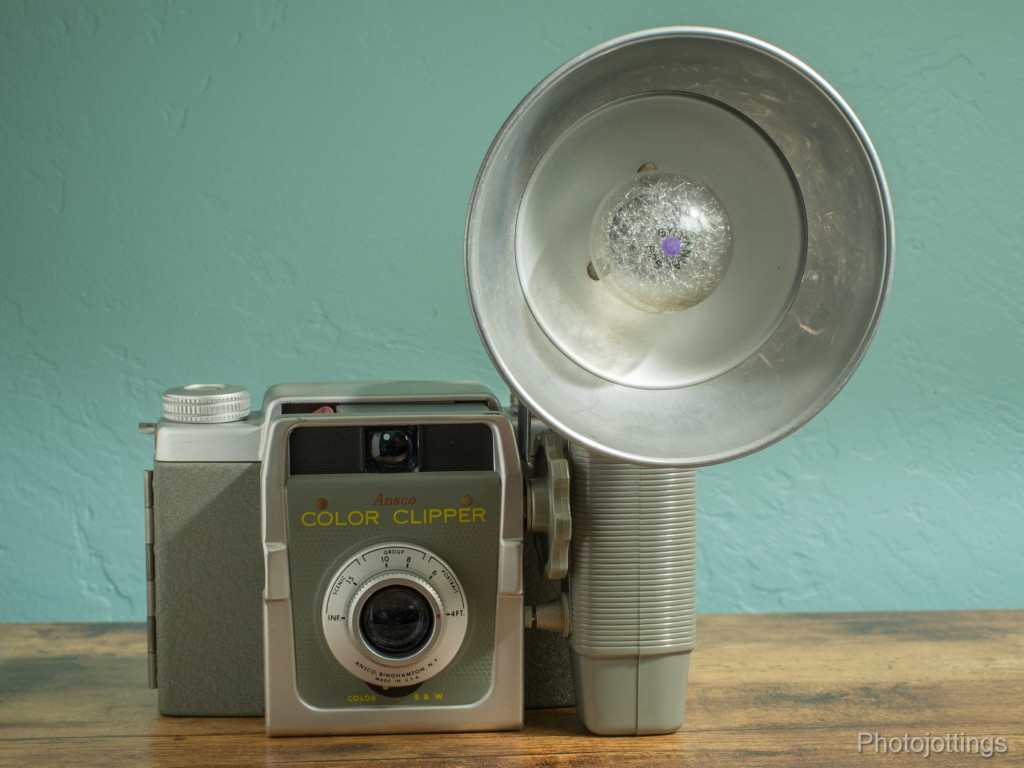 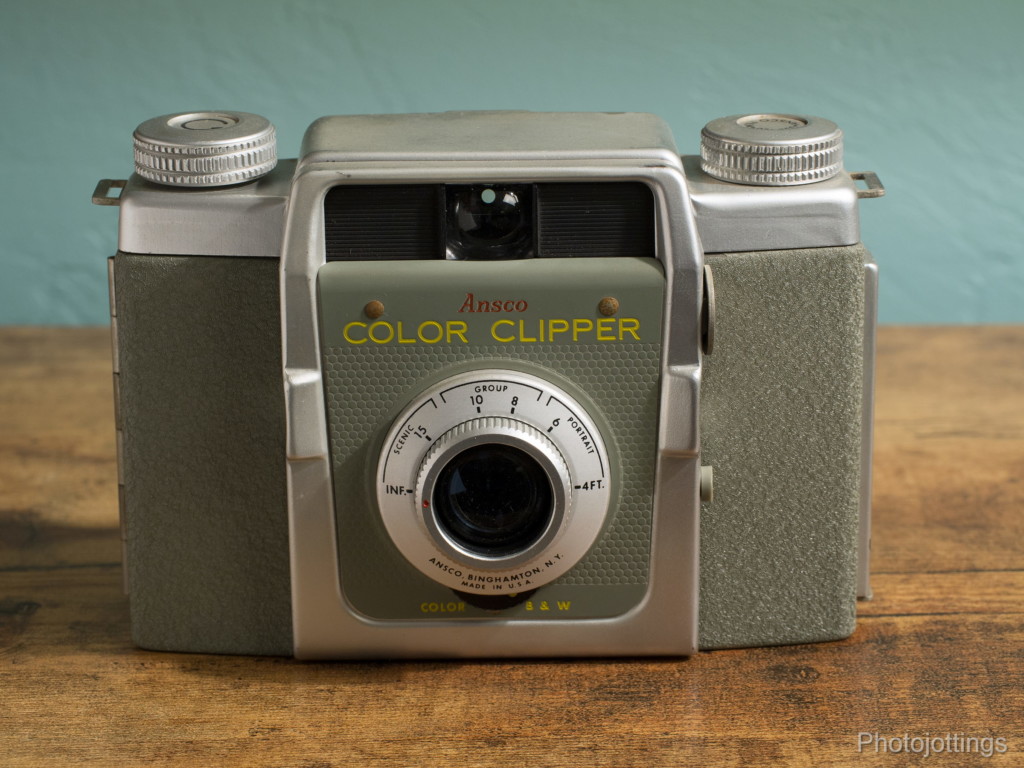 Zone focusing lens, and film winder knob on left of picture. Under the lens check out the yellow ‘color’ and ‘B&W’ aperture settings changeable with round black lever. 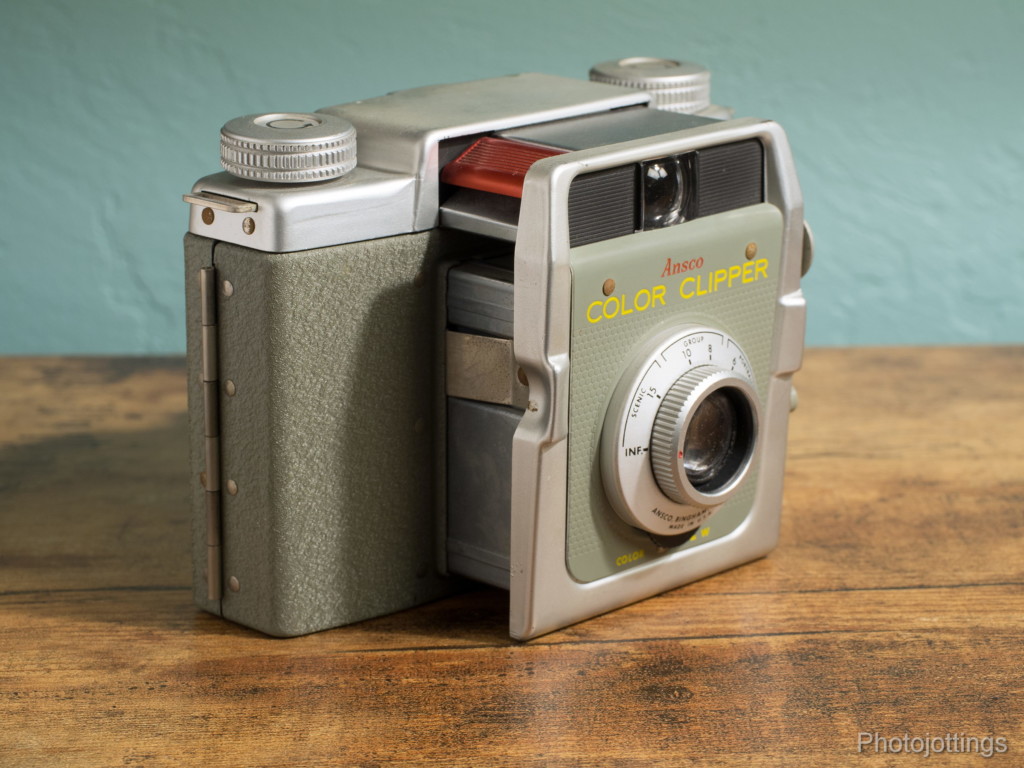 The shutter button is the red bar at the top. This is what it looks like after you take a picture and is not cocked. You can re-cock the camera by pulling up the lever and then take another picture for a double exposure it you want.  The metal springs in the center lock the lens front in place, simply push both sides in at the same time and slide the lens back to the camera body. 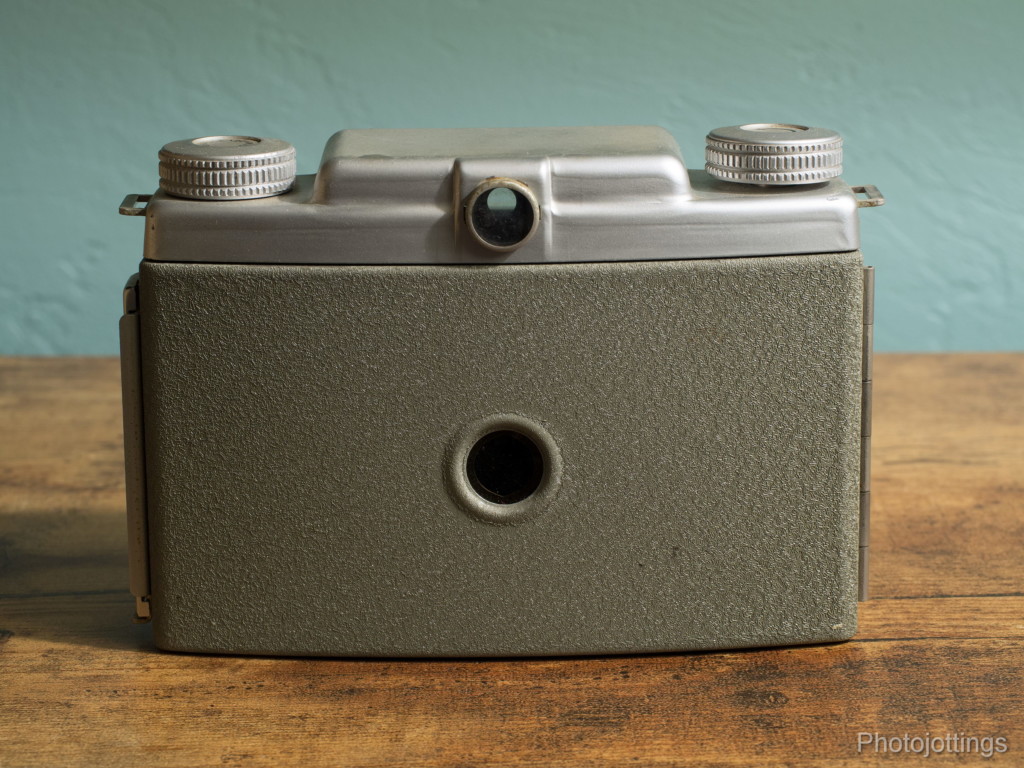 Open the camera by sliding down a lever on the left side bottom. The amber middle round window is for seeing the film advance.

Inside the camera showing the curved film gate, and spring loaded film roll holders.  The supply side is on the left, so now that spool will be moved to the right side, and a new roll of film will go in the left side.  Notice there is no proper film pressure plate. 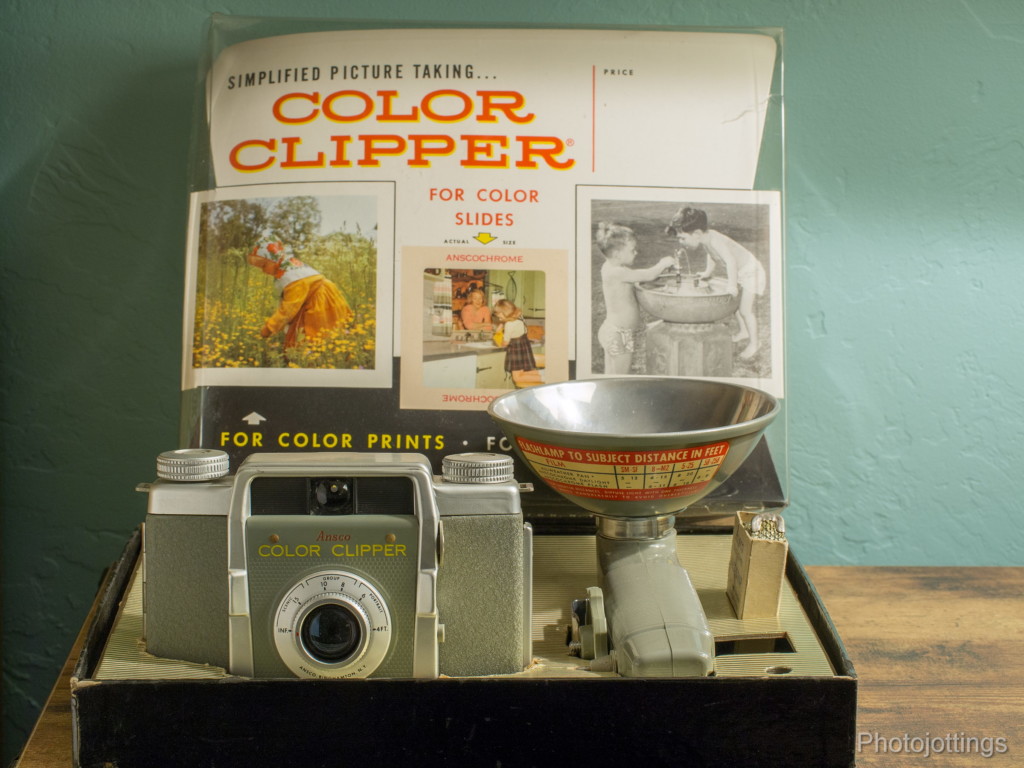 This outfit comes with the camera, flash unit with dish diffuser, neck strap on the right, a box of film, not shown, and I think a couple of flash bulbs in a slot at the back of the box.  Small hole at right front part of box is for the flash battery check bulb. 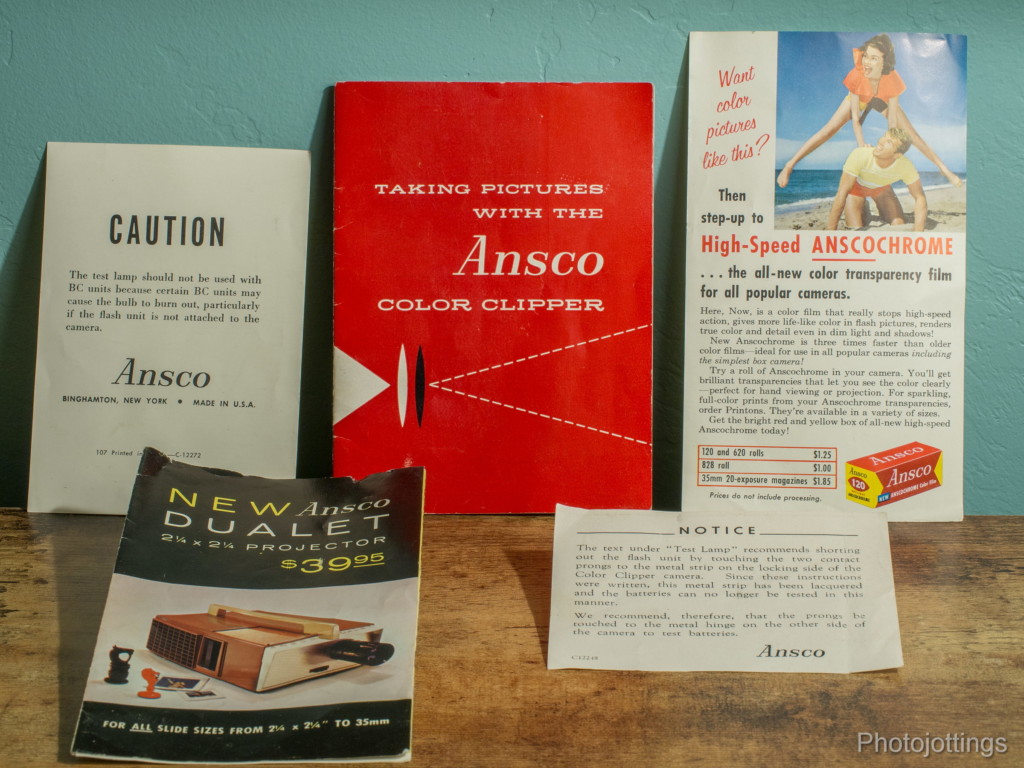 Camera manual in red. Other stuff that came with the outfit; a slide projector brochure, film choices card, and recommendations and updates for use. 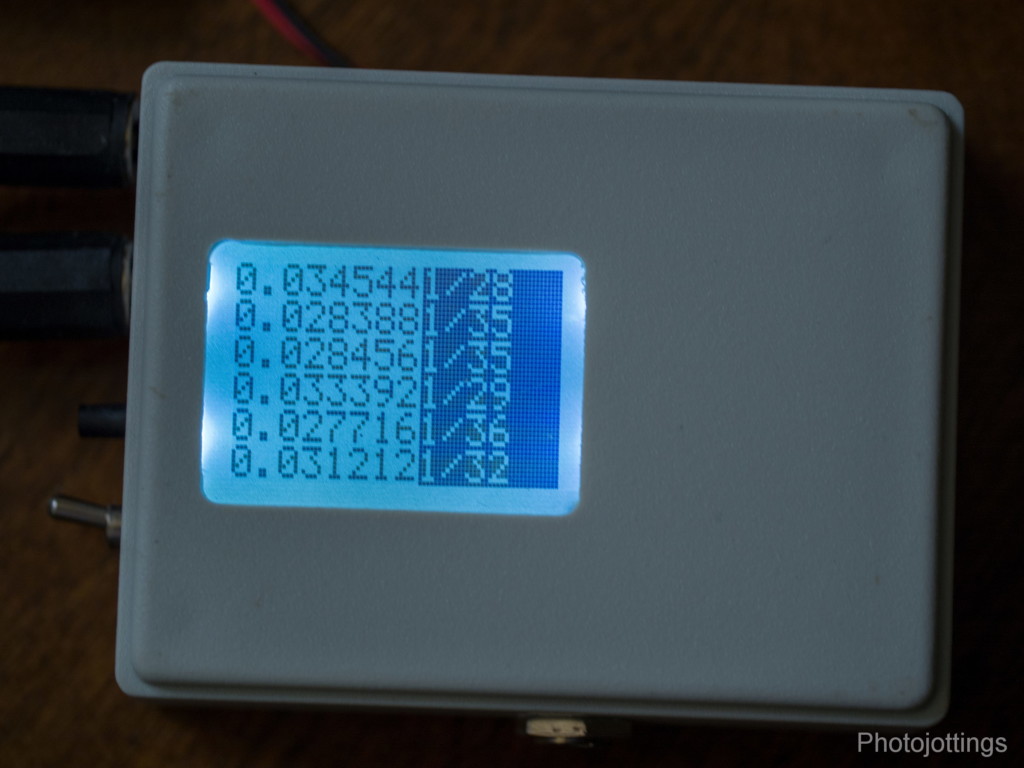 Shutter speed tester indicates the shutter is pretty consistent; with an average just over 1/30 second.

Here are some test images scanned on a Nikon Coolscan 9000 ED.  All are 2400 pixels wide; there is no additional resolution from scanning at a higher sample rate.  For some reason I must’ve forgotten to turn on the D-ICE that gets rid of the dust on the negatives; or maybe I should’ve tried cleaning them before scanning(!)

Late in the afternoon; exposure is pretty good, but could’ve used an extra stop of light, such as ISO 400 film. The focus was probably set to infinity, so the area along the bottom is not in within the depth of field. This one is the only decent picture out of the roll in my opinion.

Close focus on the flowers, decent background blur, but could use a little more light.

This shot is at F/22, notice the center is pretty sharp, the sides are soft, and the shadow detail is very poor.  This heavy shadow scene could use some ISO 800 film.

Same shot as above but at F/16 ‘color’ setting. The shadows are better along the lower part of the image, but the centers are not quite as sharp as the F/22 B&W setting.

The Ansco Color Clipper  produces sharp centers, but the sides are pretty soft, especially when using the ‘color’ aperture setting, (F/16) which is actually too large an opening for this type of camera; meaning the cheap lens along with a curved film gate are poor choices for getting a reasonable sharp image across the the frame.  Disposable $5 film cameras use the same design.

I ran one roll of film through this camera while walking along a park trail, and that’s going to be it.  I don’t really care for the poor image quality, I can get better results with other cameras that are smaller and lighter for less money.  Any three element lens camera will blow this thing away.

I used Kodak Portra 160 because I had some that was about to expire and wanted to use it up, however, for best results, I’d use ISO 400 speed film, and keep the camera at the B&W (F/22) setting.

This is kind of a fun camera and a nice conversation piece if you like chatting it up with other people.  Some folks may like the results you get, kind of like a holga, (B&H, Amazon, eBay) but with a much better build quality.  With the reasonable sharp centers, it might make a decent people camera if you keep them in the middle.  Also, since the 120 film imaging area is over three times larger than 35mm film, you won’t notice as much grain in your pictures, especially with fine grain film as I’ve used here.

Well that’s it for this review, unfortunately I’m giving it two thumbs down for image quality, but it was fun taking it for a test run.

Please consider buying your goodies through my links, that helps support the site, thanks!