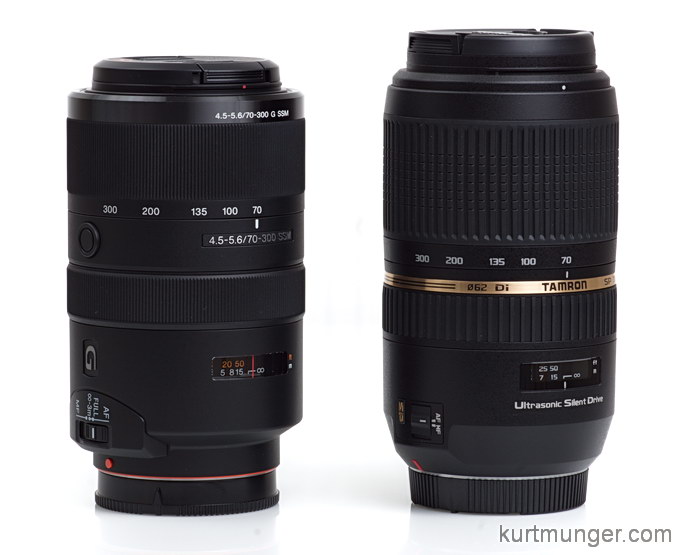 Before viewing the crops please read: I used a slightly different part of the stamp scene for each focal length to make it clear each focal length should stand on it’s own, because there was no attempt to capture the exact same coverage at different distances, so do not compare crops across different focal lengths.  The Tamron crops below are the same as I used in the review.

An indoor, controlled environment was selected (along with the stamp subject) to avoid heat shimmer and other image destroying conditions you typically get with telephoto lenses outside in the Summer, especially here in southern Arizona.  Shooting indoors eliminates those problems, but forces me to use shorter focusing distances.  Fortunately, the distances used (and listed below) are in the bird or small animal range, so it makes the cropped images more useful as opposed to very close focus test chart type shots.

For most side-by-side comparisons, like this one, I warn viewers of getting too picky about which lens is the sharpest etc.   The real world differences between each lens may not be very noticeable (if at all) unless displayed side-by-side as I’ve done here.

The Sony A900 was used for this comparison, along with a tripod, remote shutter and manual WB.  Bracketed manual focusing was used, with the resulting absolute sharpest shot used as the base for the entire set, at each length.

APS-C users: the full frame mid-section crops below were taken from the same position as where the APS-C corners would be.

The Tamron is a tiny bit longer (things appear closer) at all focal lengths as compared to the Sony, which means the Tamron has a very slight advantage in this test. 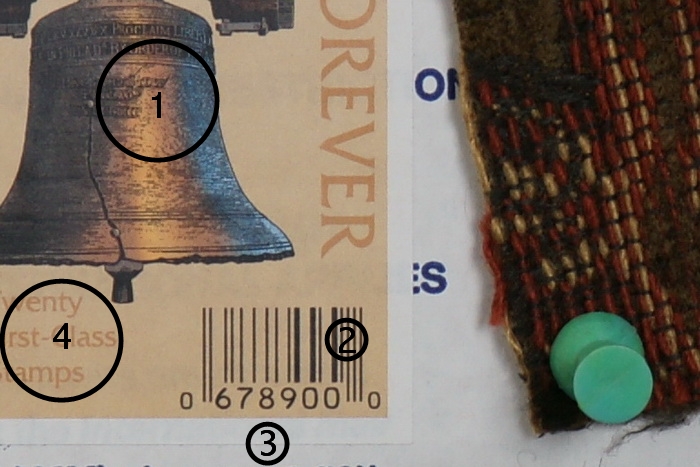 In case you aren’t all that familiar with the nuances of image quality, I’ve added some circles with numbers to help point out areas that you’ll want to take note of.  This image was taken closer than the real crops below, so I could enlarge it and put in the numbers for you to see.

1.  Look at the very fine detail here, or lack thereof between the crops.

2.  This block of lines inside the circle is just 3mm across.

3.  Look along the white border on the stamp, with the less expensive lenses, it almost vanishes among the white from the cardboard box background.  A good lens will more clearly delineate the transition (acutance).

4.  These letters are all fuzzed up on the less expensive lenses, and clearly discernible with the good ones, even at wide open apertures, it’s the same issue as no. 3 above.

The Tamron is very sharp at all apertures, with Sony lagging behind.  There isn’t much difference between the two at F/8.  Tamron’s capture area is less than Sony’s, that’s why the crops are not showing the same area.  Distance to subject; 12′ (3.6m).

Tamron wins big in the mid-sections, the Sony G is less sharp at all apertures.

The differences in the corners aren’t as apparent as the centers and mid-sections.  I see the Sony is a little sharper at wide apertures, but both are about the same from F/8-11.  The Sony is showing more color fringing, mostly magenta along the bell and black lines.  Exposure differences are from light fall-off.

The center crops at 135mm show the Tamron to be sharper at all focal lengths, although the differences are not very noticeable at f/8-11.  Distance to subject is 19′ (5.8).

The Sony finally surpasses the Tamron in sharpness in the mid-sections at all apertures.

Again, the Sony is clearly sharper in the corners than the Tamron.  Lateral color fringing is controlled well at this focal length by both lens manufacturers.

The center crops at 300mm shows the Sony with an firm lead at all apertures, but that’s not really a cause for celebration as you’ll see below.  Distance to subject is 32′ (9.7m).

The differences in the mid-sections are marginal, however, it looks like the Tamron and Sony flip-flop in sharpness between F/5.6-8.