Over at Imaging Resource you can compare the image quality of the new Sony RX1 with many other cameras, such as the Sony A99 or Canon 5D MKIII.

I spent a little time with IR’s comparometer, looking at the differences between the two Sony cameras.  In a nut-shell, the A99 seems to be about a half stop behind the RX1 in noise reduction quality, and that’s most likely due to the translucent mirror in the A99 that reduces the incoming light by a half stop.  Other differences are the result of the lenses, as the RX1 has a fixed 35mm F/2, and the A99 uses the the CZ 85/1.4 lens (I think).
I also checked out the high ISO differences between the two Sony cameras and the Canon 5D MKIII, (which has superb high ISO noise control).  It looks like the RX1 is almost identical to the Canon, again, the differences look to be in the lenses, and processing.  Canon uses a lot of color noise control, which makes colors dull but keeps the shadow areas less blotchy: Sony seems to leave that alone; it’s a matter of taste.  I suspect Sony is also using their standard (somewhat strong) luminance reduction, which smears the image just a little bit, and Canon is very light with this.  RAW files will show the real differences except for the lens issues.
It seems Sony has finally developed a first rate high ISO noise reduction process almost seven years after buying Konica Minolta.  Unfortunately, the translucent mirror cameras (SLT) will always be slightly behind the ISO curve until they get rid of the fixed mirror, or go back to a traditional mirror.
The RX1 is very high priced at $2800; however, based on what I’ve seen in the reviews and samples, it’s the best walk around camera for low light period!  The CZ 35/2 lens looks tack sharp in the centers and mid-sections at F/2, and very good along the sides, which means you can shoot at the widest aperture and still get exceptionally sharp images.  Lastly, don’t forget the size, it’s very small, easily fitting in a small waist pack, but probably not pocketable like the smaller RX100. 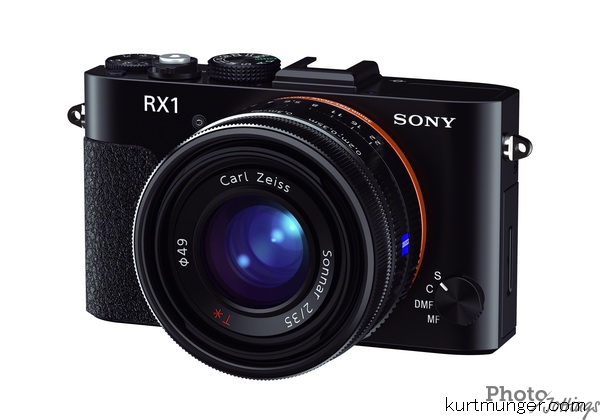