Sony DT 11-18mm F/4.5-5.6 Review - Photo Jottings
Here’s a brief look at the Sony DT 11-18mm F/4.5-5.6 zoom lens.  Scroll down for the review.
Requisite product shots.
The Sony A700 was used for this review.  For a better understanding of my review methods and terminology, go here.
This lens is currently the only factory super-wide angle zoom available for your Sony APS-C sensor camera, and isn’t designed to be use on full frame/film cameras, but it will work using APS-C size capture on Sony full frame cameras.  The lens is standard Sony satin black, with rubber ribbed grip areas around the zoom and focus rings.  Quality seem good, with a nice fit and finish, and it’s made in Japan.  It has a metal mount.  This model appears to be the same as the Tamron model, and is also a rebadged Konica Minolta lens from 2005.  Sony says they use three asperical elements and one “ED” element in the construction of the lens, see last two product views above.
Zoom control is nice and smooth and the barrel extends out another 4mm at full extension.  The focal length numbers come at; 11mm, 12mm, 14mm, 16mm and 18mm.  Funny, but my lens won’t register 14mm in the EXIF data, all other numbers show up, even in-between lengths.  There’s a lot of room between each number, so you could shoot different scenes at the same length as it appears in the data, but it may look substantially closer, or farther away, that’s in the design, they don’t put enough internal length sensor contacts to mark every single change of rotation or movement.  Other lenses are like this too, it’s not a defect, but maybe the missing 14mm is.
I’ll say it now and at the end of this review; you’re paying for the wide end of this zoom, 11-13mm, this is what you should be using, if you think that’s a little too wide, and you most likely will not need that much, buy the more useful Sony 16-105mm for less money, or the CZ 16-80mm for a little more money.
Focusing will be a little noisy for those of you used to the silent wave type motors, but it’s accurate and fairly quick.  Manually focusing is easy, as you have 1/4 turn from close-in to infinity, which is plenty of rotation.  It has the standard focus distance scale.  The closest focusing distance from lens barrel to subject is 4.4″ or 112mm.

Aperture/focal length guide for the Sony 11-18mm F/4.5-5.6  This lens has one set of overlapping numbers, for instance; you can get F/4.5 or F/5 at 12mm, depending on tiny movements of the zoom ring, this is quite common.  Look below for guide.  Also, this lens did not register 14mm in the EXIF data.

Flare and ghosting.  This is an super-wide angle lens, and covers a lot of area.  If the sun is out, chances are you’ll encounter problems .  Flare and ghosting are a problem at all focal lengths when the sun is off-center in the image.  When the sun is centered in the image, no problems.  Veiling glare is noticeable when using the lens with the aperture wide open, at all focal lengths, but more noticeable towards 18mm.  The lens comes with a hood (replacement cost $29) but it really doesn’t do much good.  Hold your hand out to block stray light when the sun is outside the image, especially at 11mm.  This lens handles sun flare better than the Sigma 10-20mm, but has trouble controlling ghosting.  If you don’t shoot images that include the sun, you don’t have to worry about this.  The severity of flare and ghosting on your image depends on many factors, including exposure level, angle of sun, aperture, focal length, and background content.
This lens is multi-coated and has beautiful colors when photographed.
Filter size.  77mm.  Other Sony lenses using this size are: 70-200mm G, CZ 24-70mm, CZ 16-35mm, 70-400mm G, and CZ 135mm F/1.8
Filter use.  There’s no additional vignetting when using regular filters.
Coma.  Good control, and nothing to worry about at any setting.   See crops below.
Color.  Looks the same as other Sony lenses.
Lateral color fringing is about average to slightly more than average on this lens, It shows up at all apertures and all focal lengths.  Stopping down doesn’t help, you’ll have to live with it or remove it with your imaging software.  It’s basically green and red along the sides of the image.  See photo near the bottom of the review.
Barrel and pincushion distortion.  The distortion at 11mm is a little odd.  It bulges in the center but flattens out at the ends, This kind of distortion is more difficult to correct in imaging software, though it isn’t bad by any stretch and probably wouldn’t need correcting if you’re using the lens for landscape scenes.  It’s not like the moustache distortion of the Sigma 10-20mm lens.  At 15mm it’s flat, and 18mm has only a very slight bulging distortion.
Lens Bokeh.  The Sony DT 11-18mm F/4.5-5.6 is a little harsh in this department.  Everything is in focus less than 15′ (4.5m) and beyond, so background blur isn’t something I’d worry about with this lens.  Check out the samples below.
light fall-off, directly below, looks mild at 11mm and F/4.5, stopping down doesn’t do much, but there isn’t a problem.  At the 18mm end there is some corner shading noticeable also, but it blends nicely towards the center.  You can’t see this in real pictures.  Very good control here for a super-wide lens, and much better than the Sigma 10-20mm.

The left shot above shows light fall-off at F/4.5, which really isn’t noticeable.  The right shot is ghosting.  I went out of my way to make a mess of this boring shot just to show you what may happen if you don’t pay attention in the viewfinder.  A lot of things can happen when you wave a wide angle lens around in the sun.  This lens is about average overall for flare and ghosting control.
Bokeh examples in the middle.  They look harsh, but getting any background blur is hard with a super-wide angle lens.  Don’t worry about this.
Coma.  Bottom row.  Super light wide open at 11mm.  No problems here.
Corner softness.  See cropped images below.

The 11mm corners are very soft, and stopping down to F/11 helps greatly.  Up towards 18mm, the corners look pretty good and stopping down isn’t all that necessary.  If you’re taking pictures of your home or architectural type shots, and you want everything super sharp, stop down to F/8 but not F/11 where softening of the image occurs due to diffraction, see below.  For indoors, use a tripod if you can’t get the shutter speeds you require for hand-held use.
Center samples next.

Look at the boring and almost fruitless shots above.  This isn’t the way to shoot this lens, but I had to be able to get everything sharp in the image, thus, the shots above.  The top 11mm crops show the sharpest centers at F/4.5, and that’s good, though F/5.6 looks good too. F/8 softens, and F/11 more so.  At the bottom, we have the 18mm centers, and it’s the same as above, wide open at F/5.6 is sharpest, then softening up slightly at F/8, and again, more at F/11.  To sum it up; the centers are very sharp wide open, and you’ll have plenty of DOF, even at F/4.5.
Example of color fringing below. 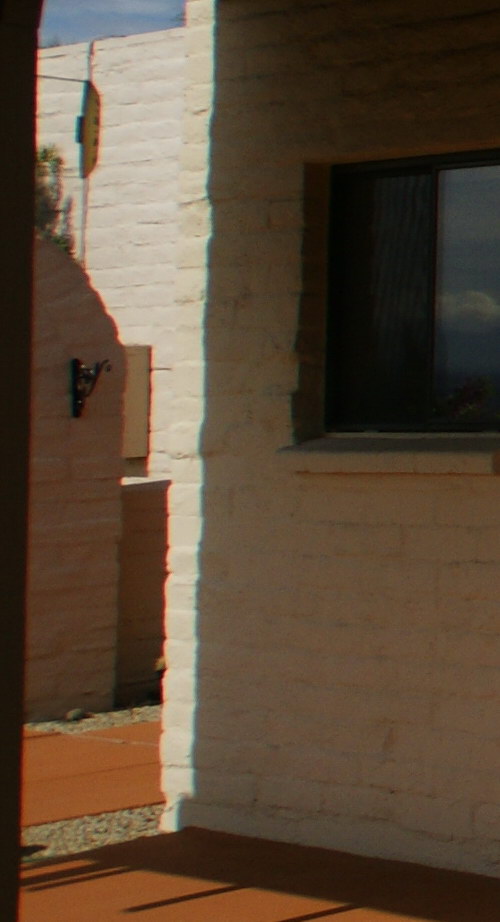 Check out the color fringing along the sides.  This sample is a crop (11mm, F/4.5) from the extreme left side, the last 500 pixels.  You can get rid of most, but not all color fringing with simple slider CA tools, such as found in Adobe PS Lightroom software.  This is lateral CA, and doesn’t get better by stopping down the aperture.
Check out the close focus shot.

This lens has a small reproduction size at 0.125x.  It isn’t meant to be a good close up lens, so don’t use it for this.

The Sony DT 11-18mm F/4.5-5.6 is currently the only factory super-wide angle zoom you can buy for your Sony APS-C sensor camera.  The difference between 11mm and 18mm is pretty substantial, and offers a big leap in area covered over the standard 18mm starting range of most zooms.

The Sony DT 11-18mm lens has sub-par color fringing control, and the corners at the super wide end are pretty soft unless stopped down hard.  The centers are very sharp wide open, light fall-off is controlled well, and the odd 11mm distortion is not noticeable in normal photos, and is nearly gone by 14-15mm.  Ghosting is average, but veiling glare control is above average.  If you pay attention while looking through the viewfinder, you can mitigate ghosts and flare on your image by careful framing and shielding of the front element, so I wouldn’t worry about this.
To give you an idea about how much this lens will cover, at 11mm or 16.5mm (35mm equivalent), you can get an entire normal-sized bedroom in the frame, from wall to wall, standing at the door.  The lens at 11mm covers a lot of real estate.  Unless used correctly, most people will not enjoy the results with this lens.  problematic areas include, getting your shoes in the shot, or way too much ground or sky, and tiny unrecognizable objects in the middle of the frame because you were too far away and tried to include everything etc.  I’ve done all those things.  Try some forced perspective type shots, like getting the camera square in the middle of the action or object of interest.  Don’t be afraid of distorting the crap out of things, that makes the shot that much more interesting.  It’s also good for taking pictures of rooms or areas where you can’t back off enough with a normal lens.  This is also called “getting it all in” and sometimes you just feel the need to do it, but is shunned by many photographers.  Used in this way walls tend to want to tilt hard over (keystone), and things near the periphery are elongated, but some of that can be corrected in imaging software.
If you don’t really want to spend big money, you can go for an after-market lens, like the Sigma 10-20mm ultra-wide angle, which I’ve also reviewed, for far less.  This lens performs very well, and it’s a little wider at 10mm vs the Sony 11mm.
The bottom line is; the Sony 11-18mm is a decent lens, but almost too expensive now at $800, I’d look elsewhere unless you can get a cheap used copy.