Below is a sample shot from the new Sony A35, (review here) which I’ve been using and reviewing this past month.  This sample shot is indistinguishable from the A900 shot at medium to small sizes.  At full resolution there are differences noticeable between the two, possibly due to the different lenses used; the CZ 16-35mm was used for the A900, the Sigma 10-20mm F/4-5.6 for
the A35.

This room has an ugly parking lot visible through the shutters, that’s why they’re closed here.  I could’ve swapped the window view, but sometimes that’s not appropriate. I liked the look of the wood shutters, and thought that closing them and highlighting them made perfect sense.  I took alternates too, but I happen to like this shot best, that’s why I’m showing it.

In addition to the lamps, I used seven supplemental lights to highlight the bed, chairs, shutters, table and night stand.  Since there is no outside light to use, and build on, I had to use two flashes
bounced at full power to give me my base exposure.

In the end, it doesn’t make any difference as far as what camera is used, any DSLR could produce similar results, even 10 year old ones, or 50 year old film cameras if you’re nostalgic, and careful.  Supplemental lighting is the key here, that’s where you want to spend your time and money if this is the kind of photography you want to do.

I like the room, but the lamps have CFLs in them, I hate those lights because of the slightly greenish
light they give off, and should’ve replaced them with incandescents, which I normally have,  but I didn’t carry them for this shoot.  I also think the bedspread could’ve been a little more interesting,
but that’s beyond my responsibility. 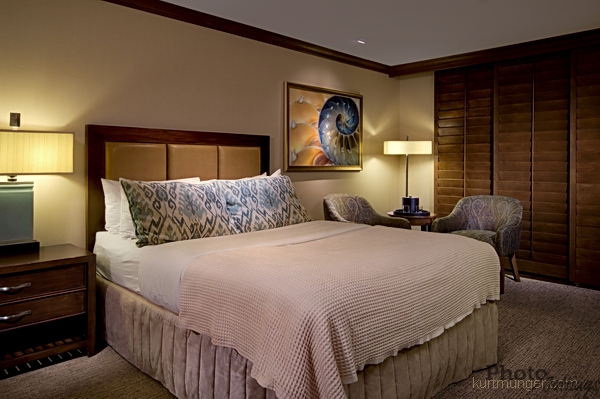