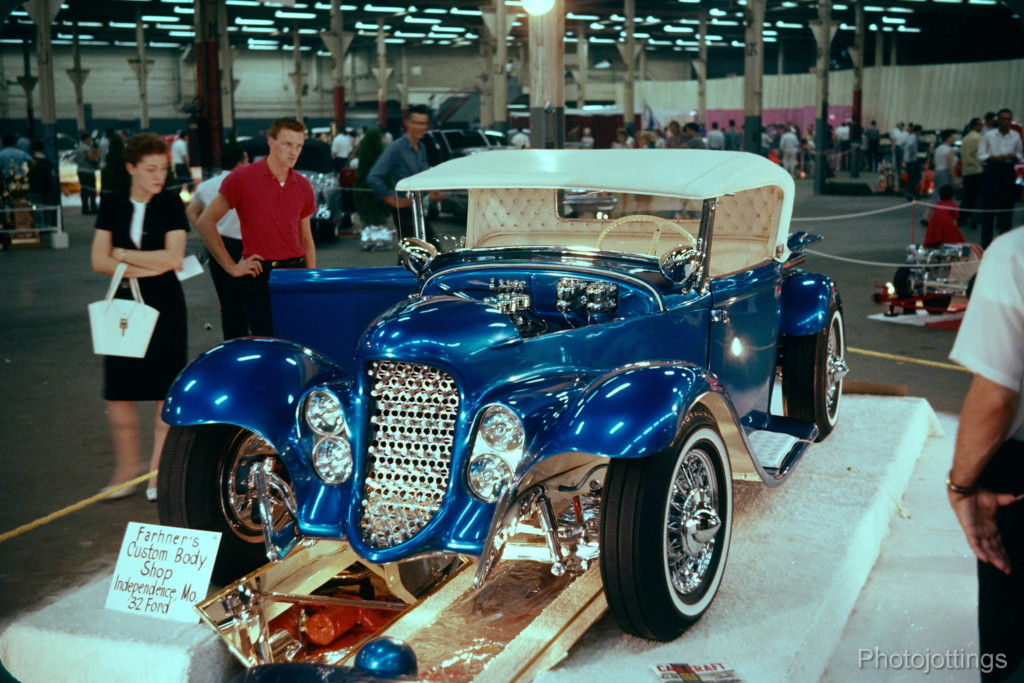 My Dad took this Kodachrome slide of Ray Farhner’s 1932 Ford Roadster pickup ‘Eclipse’ probably in 1960 or 1961 in Detroit. I’m not sure what the show was called by it could be either ‘NHRA’ 1960, or maybe ‘National Champion Custom Car Show’ in 1961.  Farhner went on to produce more custom cars, including a hotrod 1850s funeral coach called the Boothill Express!

This little pickup won many awards, (Grand Sweepstakes winner in NHRA 1960), and was featured in all the major car magazines of the day, including Hotrod, Car Craft, Custom Rodder and a plethora of others. It’s now a legendary custom Rod that has been restored, more info here.

Notice the mirror positioned on a slant under the car showing the undercarriage; the October 1960 Car Craft magazine, (with the car on the cover); the Cadillac ‘teeth’ on the front grill, and the hood with a body-color spot light just visible at the bottom edge.  I like the pose of the couple on the left, I think it makes the image more interesting.

The photo was taken by my dad with an Aires 35 IIIL rangefinder camera, which I still have, and reviewed here.  The image is a little soft due to using the lens wide open, (focused on the  stromberg 97 carbs), but that’s what you had to do back then as Kodachrome was rated (at the most) ASA 25 starting in 1961; so a light value of around 5-6.

That’s it for this trip down memory lane!